We discussed the same paper, starting with a presentation by Emmeke to refresh our memory on how regression trees and random forests work. Then we went into how these were adapted to longitudinal models by the authors in the RE-EM framework.

Matthieu Brinkhuis (UD Computer Science) has joined the MSDSlab. He is also involved in the setup of new courses within the developing profile “Data Science”. Welcome, Matthieu!

Here are Emmeke’s slides about classification and regression trees (CART). This introduction was partially based on the course by Hastie and Tibshirani, the playlist of which you can find here.

Interesting note: the vertical lines in the standard tree plots in the rpart package are related to the reduction in residual error. Longer vertical lines mean more explained variance: 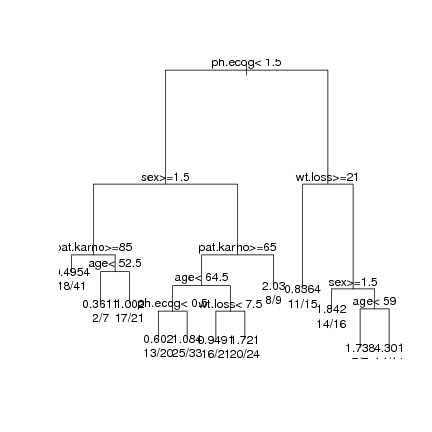 We talked about bagging and boosting as methods for reduction editing the bias-variance tradeoff.

We had several “methodology takeaways” from this paper:

Peter suggested it would be nice to have an example dataset we can try this method out on.

Recently I (Daniel) was involved in an EU project where the goal was to predict bee health in different countries. In a previous study called EPILOBEE, they already had collected some data on apiaries with the mortality rate, aspects of the beekeeper etc.

I am not allowed to share these data, but using R package synthpop I have generated a fully synthetic dataset based on it with similar characteristics. It looks very similar to the real data but none of the values are real observations, they are just rows drawn randomly from a similar joint distribution (with k-anonymity at least 5). As far as I was able to tell, a linear regression gives very similar results on the synthetic and real data.

Next meeting (=next week) we will talk about SVM’s and their interpretation, led by Kees. The meeting afterwards (3 wks from now), led by Erik-Jan, will discuss slow learning/boosting.